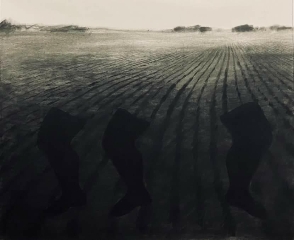 The group stand of Voloshyn demonstrates how the artists reflected on historical events and processes, and how their works find new relevance due to the passage of time in another historical moment. This dialogue takes place between the works of artists: Nikita Kadan, Mykola Ridnyi, and Lesia Khomenko.
The approaches of the authors in their works collide with each other from different angles, complementing each other,balancing between negation and assertion, while going beyond their context.

The stand will hold new works on paper that Nikita Kadan created in Ukraine during the war. His recent works reflect on the realities of the war he bears witness to. Nikita Kadan’s Procedure Room project is dedicated to the practice of torture in the police, which is common in today's Ukraine, and various aspects of its public perception. Also, the theme of the "Procedure Room" is the body - the body as something personal (inalienable), private (something that can be exchanged), and public (work with which is entrusted to professionals in uniform). The project includes a series "souvenir" plates with pictures of police torture printed on them, made in the style of medical instructions from the "Popular Medical Encyclopedia" of Soviet times. The pictures in this encyclopedia depict patients usually have a kind and calm expression at a time when their bodies are undergoing painful procedures: "The doctor knows what he is doing, everything is done for our common good.

A series of sculptures More Flags by Mykola Ridnyi refers to various architectural forms: government buildings, street markets, residential buildings, or vehicles. the theme of time recording and refers to various architectural forms: government buildings, street markets, residential buildings, or vehicles. They all have one thing in common - the flag. The artist reflects on the latest changes in the perception of national symbols in Ukraine, when the national flags and symbols present everywhere have acquired special political and historical significance. Erasing the differences in details and colors with black paint, he critically comprehends the logic of the latest political shifts, in which the architectural base, its history, cultural context, and social functions are becoming less significant than the manifestation of national colors on its surface. Using her academic post-socialist realist education, Lesia Khomenko explores the possibility of painting being political again in today's context. Lesia Khomenko works programmatically with the deconstruction of the painting. In recent projects, Khomenko deconstructs not only the image, but also all the components of the picture - its material carriers. She views the painting as a physical object, while stripping it of its tightness. Lesia Khomenko's paintings always interact with the exhibition space and each of their elements is subject to close attention.  In the series of works, Khomenko uses synthetic canvas, biflex and synthetic acrylic paints. Depicting human figures, the artist deforms the image by stretching the canvas on a stretcher. The subframe always remains an invisible, marginal part of the picture. It is often subject to replacement or stretching occurs without the involvement of the author. In her work, Khomenko transforms the process of stretching, which she herself does not like very much, into a gesture that ultimately defines the image.