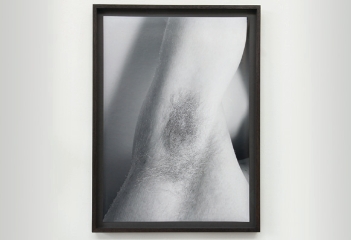 William Mackrell engages with performance and through a direct physical approach to the surface of his photographs. Hairy body parts are magnified and cropped before using an etching needle to meticulously scratch out each individual hair from the surface of the paper. Even though they are portraits, Mackrell never includes the whole face in his images, choosing to represent a universal body instead of a particular identity. The way he contorts the body results in an abstract form emphasizing line and curve that evoke the contours of a natural landscape. The large scale to which it is magnified reinforces this effect. The resulting works are an intimate yet impersonal way to deal with issues of objectivity around their own body and convey a certain futility and frustration in the effort toward intimacy, reminiscent of the self-consciousness felt when standing next to someone on a crowded train.