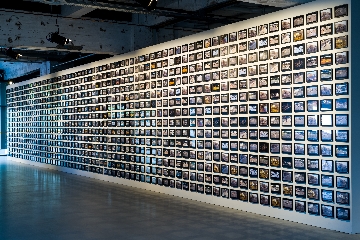 HeK (House of Electronic Arts Basel) is dedicated to digital culture and new art forms of the information age. As a special guest of the LISTE Art Fair, HeK presents an enigmatic video tutorial by French artist Elisabeth Caravella and a series of pictures by Belgian artist Dries Depoorter who has hacked public cameras to take photographs of jaywalkers around the world.

The cinematographic tutorial Howto produced by the French artist Elisabeth Caravella instructs the viewer on how to create a 3D text with a graphic software program. What appears to be a simple tutorial in the tradition of numerous videos on YouTube and other social platforms slowly evolves into a desktop performance, whose purpose becomes increasingly difficult to decipher. The instructive voice-over gives way to a cryptic and elusive sound, while a phantasmagoric figure gradually occupies the screen, until it becomes the main protagonist of the video.

In his series Jaywalking Frames, the Belgium artist Dries Depoorter combines topics such as privacy, artificial intelligence and surveillance. The series consists of a collection of pictures of pedestrians crossing the road at a red light, which were taken by the artist after he hacked unprotected surveillance cameras on different streets all over the world. The installation displays the framed pictures together with a monitor that shows the functioning of the custom software developed by the artist. Each individual image is for sale and the price is determined by the jaywalking fine that one would pay in the country where the picture was taken. With the difference that the money goes to the artist this time, and not to the authorities.

With different approaches, Caravella and Depoorter discuss the growing autonomy and seeming intelligence of technological devices pervading our everyday lives, and the transformation occurring in our society as a result of their implementation.